As a Part of Corona Virus, We are Giving Online Examination Subscription of 6 months worth 99 Rs for 1 Rs Only, Students Can utilize this opportunity and can prepare for Your exams. >> Register Now
You are here: Home / Syllabus

You want to collect the study material about the Indian Navy SAA written test purpose. Save the needed information in this page. Our site issue the Indian Navy  Artificer Apprentice Syllabus along with the exam pattern. The syllabus is essential to get the success achieving marks in the exam.

Good news for the applicants of Indian Navy Sailors Artificer Apprentice. Because of the officials of board releases the Indian Navy Artificer Apprentice Syllabus for the fee download purpose on their official site. Aspirants who want to take the application process on the given dates, those candidates should download the provided Indian Navy AA Syllabus in this page and at the same time use this downloaded material in the exam preparation time for getting the highest marks in the taking exam. 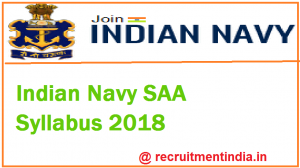 The Indian Navy Sailors Artificer Apprentice Syllabus releasing the main purpose is for taking the reference in before the exam. Without an idea, the candidates can’t appear the written test in the perfect way. We knew the competition was heavy for these vacancies. So you want to reach this competition, you have minimum knowledge about the Indian Navy Sailors AA Syllabus. So without delay start your preparation as soon as possible. Candidates can also search the latest updates on our Employment News page.

The authorities of Indian Navy issue the syllabus and recruitment in addition to the Indian Navy  Artificer Apprentice Exam Pattern. In the exam pattern consists of 100 marks and 4 subjects are included. These are English, General Science, Mathematics, General awareness. Each subject consists of 25 ques for 25 marks. The total exam time duration is 1 hour and the exam will be held in Hindi/ English. Aspirants also prepare the perfect exam schedule by using the exam pattern and mentioned the Indian Navy AA Syllabus.

Contenders, are you wish to download the Indian Navy Sailors Artificer Apprentice Syllabus. Prefer this page for saving the wanted syllabus. For the sake of applicants point of view, we can issue the all related material and information placed here. Most of the candidates have the dream to work in the central govt jobs. Aspirants who have those type of thoughts, those ones catch this syllabus and reach your target. You have the chance to catch this @ indiannavy.nic.in  Indian Navy AA Syllabus in the pdf format. On the above page, the pdf link was updated should check and download it.