UP Police SI 2016 DV/PST Admit Card for the Physical and Document Verification Process are released.  Download the UP Police SI Admit Card 2018 from the direct link activated in this page. Along with PET/PST tests, UP Police recruitment board officials conducting the certificate checking process (DV) to release the final merit list immediately after these PET/DV rounds.

Through the UP Police SI Admit Card, job aspirants will know the date of Physical Examination.   At least for one month  the UP Police PST/DV Test dates are planned.

The UP Police SI Recruitment 2016 of 3307 Vacancy has reached the final stage of the selection process. That is Physical and Document Verification stages. The  UP Police SI 2016 DV/PST Admit Card 2018 was uploaded by the UP PRB recruitment board.   Over the time from 20th Nov 2018, the admit cards are accessible to all the applicants who are qualified in the written exams. Finally, the candidates with the strong hope of they will acquire this Police job in UP state attending the physical tests and certificates verification rounds on the date which is given in the UP Police SI Admit Card 2018. From the Recruitmentindia.in page, final selection test applicants will get their admit card within a short time. 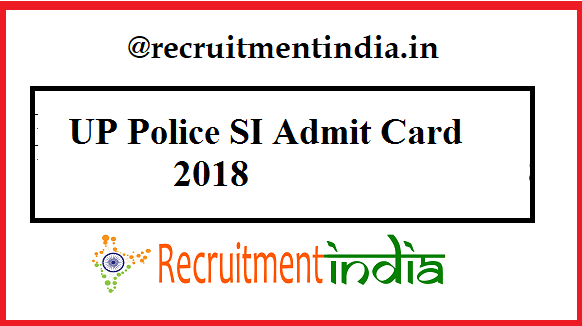 Uttar Pradesh Police Recruitment and Promotion Board will finally give the appointment letters to the candidates who successfully performed in the Physical tests. To know either you are qualified for the PST tests, then refer the UP SI Result of the written exam.  Your name is selected, then check the UP Police SI 2016 PET Dates. Through the separate notification regarding the final filtering round UP police recruitment board provided the schedule of Physical Tests along with the Document Verification rounds.   Before the UP Police SI 2016 DV/PST Admit Card release this notice is uploaded in the official site to intimate the applicants be ready for the next rounds.

Mostly from Nov last week to Dec 2018, might be the UP SI 2016 PST/DV dates are scheduled as per the exam schedule notification. But to know which date or session is allowed for the candidate’s certificate checking, a competitor has to download the UP Police SI PET Hall Ticket of final selection rounds. A lot of candidates are getting ready to appear for these rounds. But the officials will prepare the final merit list of candidates after these rounds. Who are with good merit score and physically very strong will be recognized by the board as the eligible candidate for the Sub Inspector Vacancy in Uttar Pradesh state.

For Female SI Vacancy also, the physical tests are there. But the Physical Test standards are different. In the UP Police SI 2016 PST/DV Hall Ticket, the clear details about the physical tests are mentioned. So those who are not downloaded the admit card till now, just go to the below given link to check out your date and session. As per the e  date and session printed in the prpb.gov.in 3307 SI Vacancy Hall Ticket, one has to enter the venue of the examination. Other slots are reserved for other ones.  Therefore,   physical rounds participating candidates just look at the UP Police SI Admit Card for the instructions.  Who is appearing in these rounds, they are in the final selection rounds. Qualifying status in these rounds will give the best result to you.