UPSC NDA 2019 recruitment notification along with 415 obs of  NA (2) Posts was released by the Union Public Service Commission and get the related catalogs of notification at the main website @ www.upsc.gov.in., From on 07 Aug 2019 to 03 Sep 2019 till 06:00 PM, you could apply online by collecting the Online UPSC NDA Application Form Links, and could check the see the examination dates Here In order to get this UPSC NDA Job Vacancy 2019. All the necessary Details For the Candidates convenient manner regarding this UPSC NDA Recruitment is allocated Clearly.

UPSC NDA 2 Notification 2019 is going to arrive on 07 Aug 2019 in the official site of Union Public Service Commission (UPSC). Employing new batch of candidates in three defense sectors of India that is Army, the Navy and the Air Force together is the main object of this exam UPSC NDA notification 2019. The selected candidates from this exam will give training for a specific period of time and later on completion of the training for this batch,  jobs will be given in any one of the three sectors.  For this notification, many people will wait to apply for this UPSC NDA & NA exam. Usually, this exam will conduct in two times in a year. The first exam is in the first six months of the year and UPSC NDA (I) in the next six months of the year. So the arriving UPSC NDA Job Notification full details are dropped @ Recruitmenindia.in. Scroll it For More details about this UPSC NDA 2 Vacancy 2019.

The complete qualifications for UPSC NDA 2019 notification as per the job wise.

To join in UPSC NDA, They must follow the selection rounds

Steps To Fill Up the Online UPSC NDA Application Form 2019

The approaching UPSC NDA & NA Posts Recruitment @upsc.gov.in will be live from 07th Aug 2019.  As per the previous updates, the UPSC NDA 2 application form also will commence from the day of notification and will end on 03rd Sep 2019. But now the dates seem to be postponed. Just wait and watch the updates for the declaration of the official UPSC NDA II notification 2019. High Count of the candidates has the passion to join in the administrative services in the Naval, Army, Air Force sectors.  For them, this UPSC NDA & NA 2 Job Vacancy is the best way. 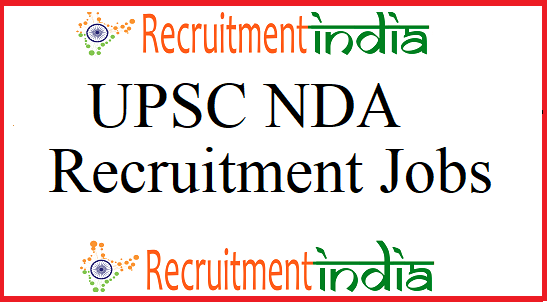 UPSC NDA (II) Online Application Form is attached now.  Union Public Service Commission is the central government job recruitment board which looks after the Group A and Group B posts. In addition to these posts, the navy, Defence jobs notifications also will be released by this UPSC board. In the sense only, now it is in the plan of releasing the National Defence Academy (NDA) and Naval Academy Exam (NA) I 2019 Notification. Actually, the notification has to have arrived now and then Links of the UPSC NDA 2 Application Form Information is given now. So surely you can see the notification on that date @upsc.gov.in.

UPSC NDA 2019 Notification will appear Now for all the Interested and willing Candidates. This UPSC NDA & NA Posts Selection Process are the written exam, medical fitness test, verification of documents. Services Selection Board will lead all these rounds on behalf of UPSC. The forwarded candidates in all these three rounds will get admission in the training batch of the NDA program. The successful training completed candidates will be placed into the 415 administrative UPSC NDA posts of the anyone of the Naval, Army, Air Force departments.